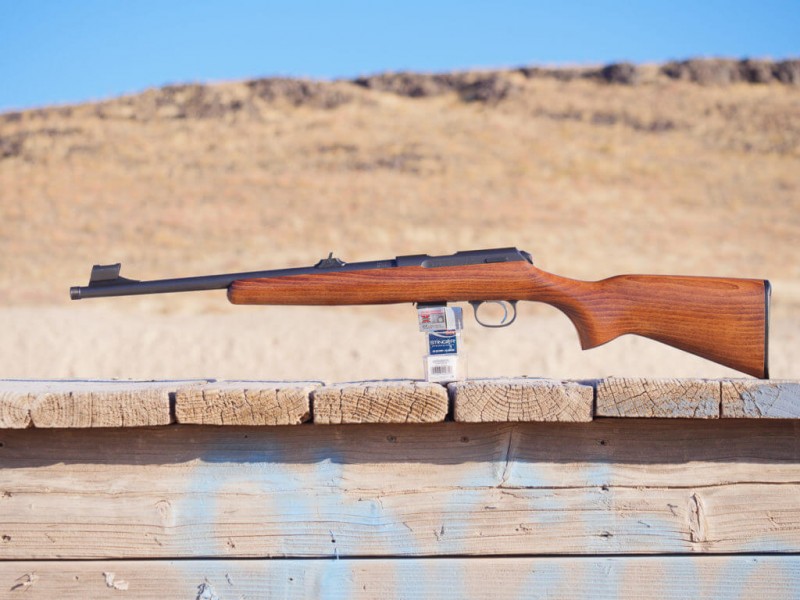 CZ USA’s reputation for high quality, accurate rimfire rifles is well earned. The CZ 452’s were popular, and the CZ 455’s have become commonplace among serious shooters. I got my hands on the new 457 Scout rifle, the “youth” model of the new 457 lineup. I’ve been using it quite a bit and I’m impressed. Its approachable price tag belies the quality of its craftsmanship and its inherent accuracy.

The CZ 457 Scout is chambered in .22 LR and it comes standard with a beechwood stock and 16.5″ barrel. From its hooded front sight to its chrome-plated trigger and it’s satin-finished stock it is crafted to high standards. The wood looks and feels like a modern version of classic wooden stocks. The action is smooth and precise. The gun comes up nicely and feels balanced. Its short length of pull makes it a youth gun, but its precision-machined workings make it a worthy consideration for your adult arsenal. It differs significantly from the previous 455, but it carries on CZ’s tradition for accuracy and performance.

The 457’s new safety is the most-talked-about difference from the 455. CZ listened to the folks who teach the young people how to shoot — people like hunter’s education teachers and 4-H shooting coaches — and changed the safety selector to the American-style. Historically, CZ’s rimfires have required that you slide the safety selector back to fire, and push it forward to safe the weapon. This new setup matches most of the American manufacturers who set their guns up with push-to-fire safeties. This should help youngsters develop good habits that will carry over to their larger caliber rifles later in life.

Secondly, the action can now be cycled while the safety is engaged. This is my favorite thing about the safety updates. It means you can unload the weapon with the safety on and minimize the chances of firing while unloading.

The last new feature is the red button that pops out the back of the action when the weapon is cocked. It’s both a visible and tactile indicator that the trigger is live. I like that I can check it with my thumb before I even raise the weapon and that it works even in low light. It’s a nice feature for hunters, as well as instructors managing multiple shooters.

The safety switch is large, thick, and knurled. It slides solidly into place and doesn’t make any noise doing it. You don’t have to worry about spooking game with the workings of this gun.

Interestingly, the trigger still moves when the safety is engaged, but you just feel it stacking up as you move it without ever clicking.

CZ has taken all they’ve learned making and shooting the 452 and 455 series and applied it to the 457 line. The action is now shorter, lighter, and easier to work.

They’ve trimmed the action back about 1″ and it travels about that much less every time you cycle it. They’ve also re-shaped the bolt, carving one whole face flat. Furthermore, they’ve changed the movement of the bolt handle so that it doesn’t need to move as far up before coming back. These all combine to make it much faster to cycle the action and chamber the next round.

The new bolt handle only moves upward 60 degrees instead of 90 degrees. So it’s not only faster, but it also makes it easier to work with scopes. Scopes can now be mounted with larger ocular bells and they can be easier to fit along the top of the receiver. The new angle also means you won’t smash your fingers into the scope and you won’t pinch your gloves either.

The front of the bolt is stainless steel while the rest has a nitride finish. There’s a red button on the back of the bolt that pops out when the rifle is cocked.

A paddle button on the left side of the receiver releases the bolt and it slides out the back of the receiver. It makes it easy to clean and clear any trouble without tools. You can also bore sight a scope and access the top of the trigger for lubrication.

The action and barrel can be removed from the stock with two screws. The 455’s stamped bottom plate is gone. Now the trigger guard and magazine frame interlock and are fit to the stock with precise tolerances.

The 457 Series carries on the 455’s modularity. The Scout ships as a .22 LR shooter, but you can change it to shoot 22. WMR or .17 HMR. And it’s compatible with 455 barrels and magazines. The 457 currently is only produced as a right-handed rifle.

The top of the receiver is machined with an 11mm dovetail for mounting optics and it’s ribbed to minimize glare when using the iron sights. The whole thing has a nitride finish.

Out of the box, the chrome-plated trigger is good. It is remarkably consistent. It weighs in at 3lbs, and after weighing and averaging 20 trigger pulls, it was always within .5 ounces of 3lbs.

It’s got a soft take up that requires increasing pressure, then it breaks cleanly in the same place each time. There’s no hard stop after it breaks. The over-travel continues with that same soft feeling as the take-up. If the safety is engaged, the trigger still moves and it’s got that soft feeling as the resistance stacks up.

Now, that’s out of the box. This trigger is user-adjustable for weight, creep, and over-travel. All it takes is a few Allen wrenches. At this price, it’s a very nice trigger setup.

The Scout ships with iron sights as a standard feature. The front blade sight is adjustable for elevation and has a ribbed front ramp to disperse sun glare. The rear leaf sight is adjustable for windage and is mounted forward on the barrel instead of on the receiver. I like it up there because being farther from your eye makes it easier to see it in focus with the front sight. A beefy and stylish hood covers the front sight with a window in the top to let light shine on the blade.

The receiver is milled with an 11mm dovetail to accommodate scope rings. Since the new bolt handle only moves upward 60 degrees, you can use low profile rings and larger diameter scopes. The rail is divided by the ejection port. CZ also sells a Picatinny rail that mounts over the receiver with minimal height increase.

Cold-hammer forged and just 16.5″ long, the barrel on the 457 Scout comes up quickly and gets on target fast. Shorter shooters will manipulate it easily. It’s got a significant taper over its short length.

It’s nitride coated and the matte finish with the satin-finished stock looks good. CZ’s rimfire guns are modular and you can swap this barrel for a heavier varmint version or even a .17 HMR version at home.

The barrel comes threaded at 1/2″x28 for suppressors and includes a knurled thread cap. The sights are mounted in the barrel but can be removed if you decide to mount a scope.

The stock is straight-grained beechwood with a satin finish. It’s got a modern pistol grip that’s small enough for young shooters but still fits well in my large hands.

“Precision” is the only word to describe the fit between the metal components and the stock. It all fits as if it were milled from a single billet of material.

Barrels can be swapped for thicker varmint models, and the stock is channeled to fit the larger barrels, too. You can also upgrade the stock as your shooter grows.

Length of pull is 12″, and the buttstock is covered with a hard plastic buttplate. I’m not sure why 12″ is a standard “youth” size. Teenagers may fit that length well, but my 8-year old has a hunting license and this stock is still a bit too long. I’d like to see it shorter with a shim kit to bring it out to 12″. Of course, there’s nothing stopping one from using a chop saw to bring it down to size. Likewise, adding a recoil pad is an easy way to extend its useful years.

Magazines from your older CZ 455 work with the CZ 457’s, which is great. CZ produces these polymer magazines in up to 25-round versions. The Scout ships with a single shot adapter, which is supposed to teach ammo conservation, but I’m sure plenty of instructors enjoy the peace of mind knowing there isn’t another round in the gun. There are third-party manufacturers for magazines, as well.

Without any adjustments to the sights, it shoots well from the start. I’ve shot all kinds of .22 LR ammo from the mixed box in my garage and it all shoots well enough to kill pop cans at 50 yards.

Consistency is the key to accuracy, and the trigger on the Scout is incredibly consistent. That makes it easy to learn to shoot it well.

I got serious at the range with CCI’s MiniMags, CCI’s Standard, and Winchester’s T22 match ammo. I’m pretty sure that the Scout shoots much better than I do. I shot sub-1″ groups with each ammo. I think I could have done better with a 5-round magazine, but I was using the single-shot adapter that came included with the gun and had to move a little more to load each subsequent round. These were all shot at 50 yards with the included iron sights.

For hunting small game, this is my new favorite rifle. Its short length makes it easy to carry. It comes up quickly and intuitively once a rabbit or grouse is spotted. And it’s accurate and repeatable. The sights are clear and the forward-mounted rear sight is easy to line up.

The only thing I’d like to improve about this gun is its weight. It’s a bit heavy for a youth gun at 5 lbs. The ubiquitous Crickett .22’s weigh-in at 3lbs, but I have yet to use one of those that shoots anything like as well as the Scout. I suppose the stock is the only thing that could be lighter, but the beechwood is so nice I’d hate to see it changed.

I love it for hunting and plinking with kids. I suspect if you’re serious about target shooting that other models in the CZ 457 lineup may be a better option, but knowing how well this base model shoots and knowing that it’s all a modular system, I expect that those other guns will perform with similar excellence.

If you’re teaching a young person to shoot, do them the service of letting them use a gun that will allow them to shoot well. A cheap gun makes for a cheap experience that won’t get kids hooked on shooting and hunting. CZ’s 457 Scout is a fine rifle. And while it’s a little more costly than some guns in its target market, it’ll outperform them and grow with a shooter for life. MSRP is $365, but I’ve seen it lower on the street. I highly recommend it.